Longer form: Writing aches. Which is why this blog is not updated often. I prefer writing longer content.

This is why there’s not much original Adventure Fantasy Game material on the blog. Fortunately AFG runs very well using D&D and other clones material without adaptation, so it’s not a real problem. But sometimes you want the AFG stuff. And I have good news.

Kaneofmelnibone started toying with AFG, we started to have a wee discussion on a few topics, and he started putting out very good content at his blog http://xpertcliques.wordpress.com

For the time being there are a few monsters, spells, cults and a new setting. There are some yet unpublished bits that make me even more excited.

Kaneofmelnibone does AFG uncannily well. First, all the material is very good, but that’s not the uncanny part.

The uncanny part is that while we clearly do not share the same authoral voice, nor the material is something I would have written, he gets AFG so well that I completely agree on all the implementation of the crunchy bits. And the fluff very definitely agrees with me too.

So if you fancy reading what can be done with AFG, add XpertCliques to your blogroll.

Today it’s the release date for Chthonic Codex – volume 2: Academia Apocrypha in Print+Pdf and also in PDF only version. The PDFs should be immediately available, the print copies should ship from April. Mind you, I have a new order fulfilling system that could either deliver stuff immediately to your inbox or switch on my neighbour’s oven. If you smell burning and don’t receive the files, fire off a support request from the shop.

Before I start with the blurb, let me tell you a couple of things.

First, I love magic users, and this is the book I’ve been wanting to write for 20 years. I could have made it longer, but 64 pages ought to be enough for anybody. If you buy it now and I decide to add extra material later, you’ll get the updated PDF as a free upgrade.

Second, this book is crammed with fluffy crunch. All mechanics bits that went in were selected to support the setting. Took me ages, and I binned a whole lot of them. It’s been hard.

And now, the announcement proper.

Chthonic Codex – volume 2: Academia Apocrypha: this second volume counts 64 pages of fragments from the recently recovered Chthonic Codex. It’s the player’s handbook of the Chthonic Codex setting, as well as being a stand alone spell book with a bucket of crunch on top for Swords & Wizardry, other retroclones and Adventure Fantasy Game. It’s preceded by Cryptic Creatures and will be followed by another volumes (Mysteries & Mystagogues). It’s available in PDF, Print + PDF and three limited editions: Boxed Set + PDF, Codex Edition and Boxed plus Codex Edition (all are available here).

Maenad, the Ravenous Ones – a B/X and AFG class

…the god-intoxicated celebrants draw milk and honey from the streams. They strike rocks with the thyrsus, and water gushes forth. They lower the thyrsus to the earth, and a spring of wine bubbles up. If they want milk, they scratch up the ground with their fingers and draw up the milky fluid. Honey trickles down from the thyrsus made of the wood of the ivy, they gird themselves with snakes and give suck to fawns and wolf cubs as if they were infants at the breast. Fire does not burn them. No weapon of iron can wound them, and the snakes harmlessly lick up the sweat from their heated cheeks. Fierce bulls fall to the ground, victims to numberless, tearing female hands, and sturdy trees are torn up by the roots with their combined efforts… 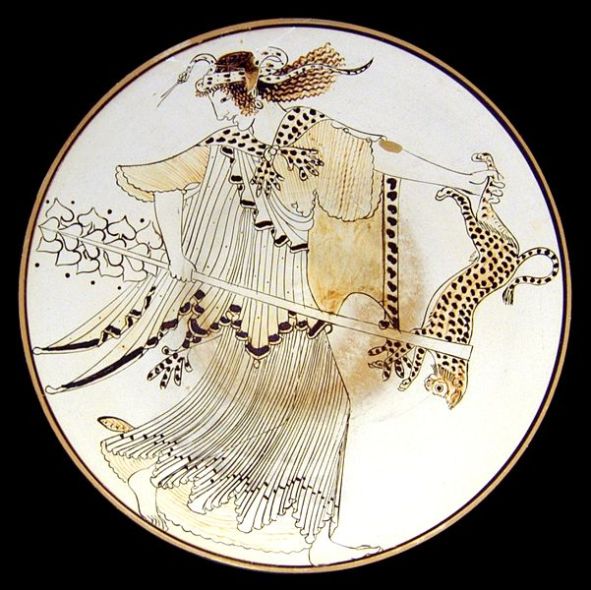 Maenads are member of the Thiasos, the reveling retinue of Dyonisus. The frenzy of their god-inspired ecstasy sometimes makes them join bands of adventurers. This should be strictly a female class but it’s much better if not.

Levels, saves, hits and combat: like a MU/Caster of the same level. They save as clerics, because they are crazy cultists. Literally.

Virtue of the Ravenous Reveller: Maenads eat human flesh and are drunk almost all the time. Unrelated to their diet, at level 1, 3, 5, 7, 9, 11 the maenad learns one of the following powers:

So, yeah, if you wonder what’s the kind of content you can find in the Chthonic Codex, this is it. The Codex tends more to weird/faerie tales though.