Casters in Empire of the Petal Throne

First episode of my “Casters In…” serie.

Empire of the Petal Throne has a really interesting magic system. I got myself a copy years ago but, well, I felt intimidated by the very rich background so I never ran it. I know it’s not something I should worry about, people wrote about this EoPT-self-policing phenomenon, and I’m fully aware myself of how one should always ignore the game police.

Anyway, back to the magic system: warriors, priests and magic users classes all have a list of skills. At character generation you can pick an amount between two out of the first three and five out of the first seven, depending on a dice roll. At each new level the character gains a new skill, starting from the lowest in the list. 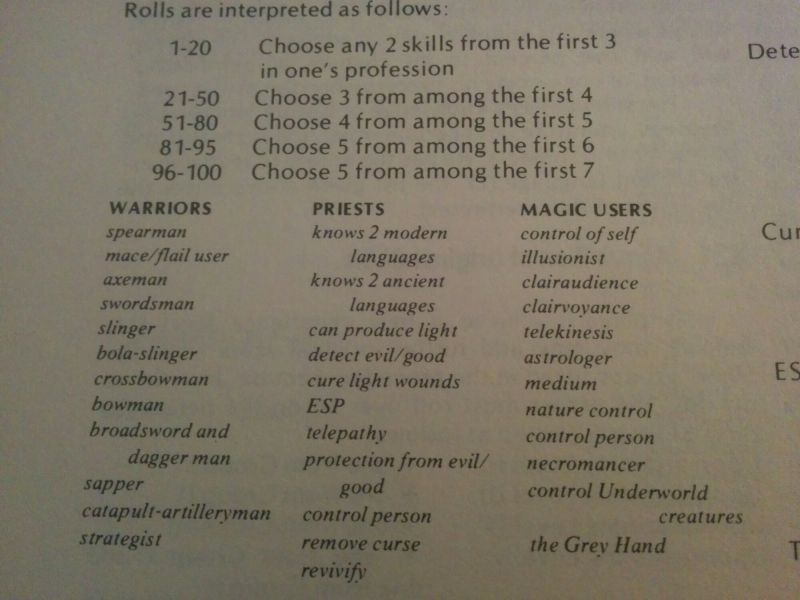 While for fighters the skills essentially  seem to unlock weapon proficiency (which leaves me wonder how CL and MU can use weapons without training, maybe warriors fight as MU when fighting untrained?), Priests’ and MU’s list are populated with a mixture of mundane skills (astrology, know 2 modern languages) and spells.
Most of these spells are usable once a day, and there’s a level-based chance of the spell not firing off.
The cleric list is essentially vanilla D&D, and Revivify is the twelfth skill on the list. Magic users have mostly a mixture of divination and necromancy, with at the eleventh slot “The Grey Hand”, a touch-range finger-of-death, SAVE OR DIE NO SAVE ALLOWED, IT’S WRITTEN IN THE HANDBOOK, and a -10% to resurrection survival, and even then the character is disabled for a week, because high level MU have a big “fuck you” tattooed on their grey hand.

And then there are the bonus spells. At every new level the character rolls on this swanky table to find how how many spells of which level they learn. As you can see there are only three levels, and there’s a small chance of having a level three spell at level four: the spell is chosen from a list shared by MUs and priests, and there are 18 spells of level one and two and 23 of level 3 (including a host of magic walls). Level one spells vary from “disbelieve and dispel” for illusions to “Madness”, a SAVE OR PERMANENT CONFUSION. Level three spells are things like “Invulnerability” to unenchanted metal and chlen-hide weapons, “The Silver Halo of Soul Stealing” and “Doomkill”, an SAVE-OR-DIE spell with a 240 feet area of effect. Doomkill is cool because DOOMKILL FUCK YEAH and because there’s a chance of overshooting or undershooting, and on a 2 on 2d6 the spell is cast so short the MU is caught on the area of effect. WHAT.

What to bring home from all of this?
First, characters have fewer spells than in D&D, but usually can use each of them at least daily. This is better for starting characters, as it makes chargen waaay shorter, and more spells per day is hardly a bad thing.
Then, there’s no memorization, or picking spells from a long list, which sometimes irk some players. It certainly irks me.
The bonus spells help differentiate between casters, and their random allowance, while sometimes frustrating, shows that magic is a finicky path indeed. The failure chance does that too.
Lastly, this makes spellcasters way easier on players new to RPGs. You get to choose one or two skills to be delayed a level or two, and that’s it. No tree of feats, no long list of spells and very long decisions to take. Also, these spells have cool names and do cool stuff, and the default “magic user as necromancer” seriously appeals to me.

4 thoughts on “Casters in Empire of the Petal Throne”