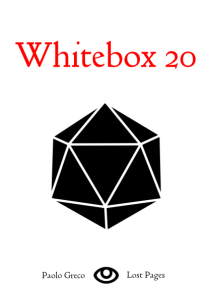 Ok, we are still in inner-head-rable-land here. Part of a series. Feel free to skip this instalment. By next time I should actually have a small document ready. Typeset in LATEX.

The current margin system needs a margin of 5 for a full success, 10 for great and so on. This is good in case of success because we immediately know by looking at the die the margin: if we pass and it’s a 5, the margin is 5, marginal. Just look at the d20.

Interestingly, if you have a -3 to the roll, it just changes the maximum success.

This also means that if you’re not good you simply don’t have the option for incredible successes. This is intended.

Except if you risk. This is intended too.

Do you have an Alternity?

There’s another way that could work. Alternity came with a margin system that I think is great BUT requires some math. Roll under the modified attribute for a success, but IIRC if you roll under attribute/2 it’s a full success, under attribute/4 for critical. You might have had to roll and sum/subtract extra dice as difficulty modifier.

Neat. Very neat. I was really impressed back then (and sadly didn’t play Alternity).

But requires mathsing. Ok, it’s math that is easy and somewhat can be done in advance, but it’d rather it not be there, and I’m not sure this math is actually easier than calculating the margin. who knows?

Yet another way is to roll multiple times. This combines nicely with bennies and dice pools, and let’s disregard momentarily that rolling a number of times depending on a high-spread attribute is potentially unwieldy (you train a little, 1 reroll, but if you train a whole lot, 5 rerolls? would would this work with improvement-through-usage?).

D&D 5E does this (also AFG and Chthonic Codex before it) but it has the unfortunate issue of being more effective for attributes toward the middle of the spread, when the base success rate is around 50%. Training for people with little or a lot of talent is ineffective. This is not something I want in my game.

A variation is to roll multiple times and count successes. I really liked this in Merchant & Marauders, which uses this approach with something like the 5MORE system. While still having problems with low attribute, at least high attributes get multiple successes. Which by definition win over a smaller number of successes. I have to run the math for this, but I suspect it can be handled as a variant of the original WoD system (without the horrible critical special cases that made that system a horrible moraine where sometimes being better at something meant both more chances of failure, both normal and critical).