This month we released False Readings, a book of short fiction by Patrick of False Machine, and we would like to make available as a free download two of the short stories: Knights of the Snail and The Tale of Sir Spiralling. Download them here.

The full False Machine is available in print and PDF.

I don’t like the Clerics-as-class in D&D, and I blogged several times about it. So in AFG there’s a single caster class with a single spell list, in Mageblade there’s the titulal Mageblade with a smaller list and less slots and the Spellcasters with the unified CL/MU spell list.

Finally, in Chthonic Codex there’s the School of Pharmacy teaching Physiurgy, a setting-appropriate list of healing, cures and raise dead. Well, there was, before that freak accident with the Great Reactor. Now that I think about it, the two other schools with knowledge on how to remedy loss of life had horrible troubles too, with the School of Necromancy falling at its apex under the massacre of the Orthodox/Reformist schism. The Circle of Fire Dervishes, instead, was just being so utterly socially inappropriate that the other schools teamed up and literally tore the Circle down, banning anyone from entering it and keeping only a handful of sympathetic dervish savants around, lest Pyromancy be lost.

Anyway, here’s the Physiurgy school for Wonder & Wickedness, full of healing spells, and a level 1 resurrection spell too because that’s how we roll. I’m not entirely sure about the catastrophes but, if the caster caused harm on any creature in the past hour, always roll on a catastrophe. Also, please, let the caster read the catastrophes beforehand, or at least suggest them to buy 50 coins worth of balms.

There are many other types of clerical spells, and eventually I’ll get around to write something to address them too.

Cure – The subject is healed of 1d6 hits +1 hits per level. If the caster passes a Save or a Healing check, the subject is also cured of a single disease.

Wilson’s Orange Draining – The caster shoots an orange ray. If it hits, it deals 1d6 hits to the target and the caster is healed of the same amount and the spell ends. If it misses, the caster can retry the following round, up to 6 attempts in total.

Death Unto Life – First, roll 1 Catastrophe. The dead target is brought back to life at 1 hits and, temporarily, at level 1. They will recover 1 level per month, up to the level they were before dying. Should they accrue XP or Accomplishments, that simply makes the recovery longer.

Salvation – The touched target automatically passes the next poison, disease, petrification, paralysis, mind-affliction et similia save they would otherwise roll this turn.

Healer’s Last Stand – all allies within 10′, but not the caster, are healed of 1d6 hits +1 per 2 levels. The caster takes 2 temporary damage for every ally healed this way.

Aura of Renewal – The caster can sit and chant for up to 1 hour/level. Should the caster move or stop chanting, the spell ends. Characters resting within 20′ of the caster are immune to the effects of disease or poison and can, every hour, either regain 1d6 hits or roll a Save to be fully healed of a single affliction of disease, poison, blindness, et cetera.

Salvific Apport – the caster’s hands exude some apport, a gunky white goo. The apport will evaporate at the next dawn, but until then it can be used for spread on wounds during first aid (taking 1 turn) to heal 3d6 hits or can be simply swallowed to immediately cure poison.

Milk & Honey – the caster brews up a mix of milk and honey (and other things) which, if immediately drunk, puts the drinker to sleep for 3d6 hours. While all attempts to awake the drinker will be fruitless, they will wake up at maximum hits.

False Machine is a very good blog, and Patrick also writes short stories and other fiction, and they are good.

But reading longform fiction on a blog is not optimal. So we collected twelve of his short stories and other fiction and put it in a book, False Readings. Patrick explains it here.

False Machine is available in print and PDF. It’s about 250-260 pages: the two versions have slightly different layout and page count, but the content is the same.

The Flying F*ckers of Morrowind

The best things about Elder Scrolls games, especially the early ones in the series, is wandering the countryside and finding ancient tombs and similar bullshit, or shipwrecks with diamonds in the hold, or vampire castles, or the flying f*ckers of Vvardenfell. 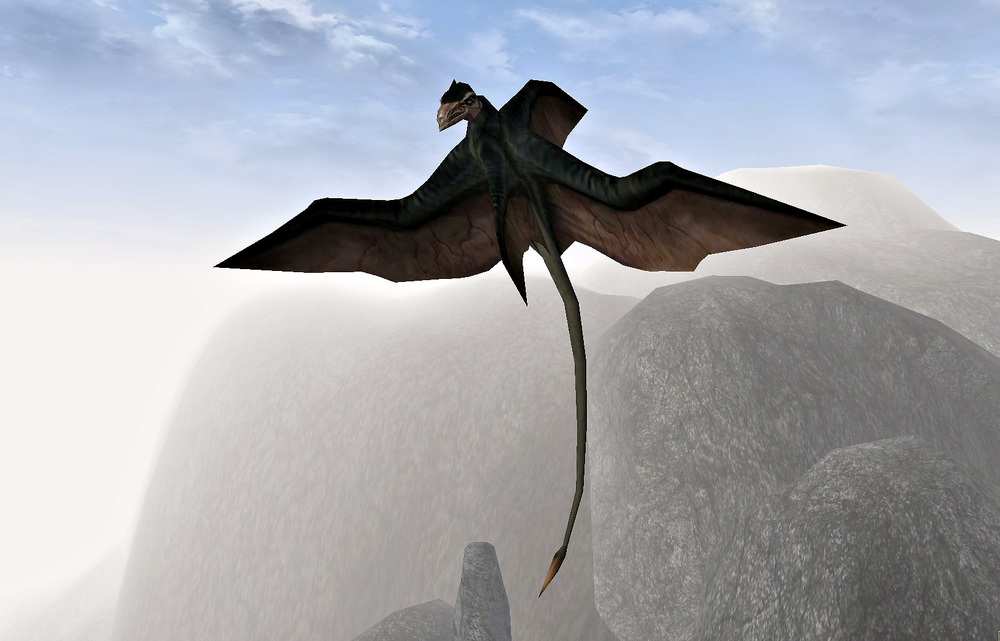 Not the flying f*ckers again

They only want to eat your face.