Oh, the joys of writing something purely for D&D. I’ve been working on a word/runic magic system for a while and while I was at it I though I could just spin off one of its subsystems. I also took the occasion to make a book with all the S&W Whitebox spells, but organized by level and not in alphabetical order.
Yeah, I know, de gustibus non disputandum but there is clearly a WRONG and a RIGHT way, and the alphabetical sort is a pain in the ass when you’re trying to allocate slots and need to check spell details across the level. Which is much a much more common scenario compared to, say, check spell details across the spells starting with the letter S. If you need to find a spell by name, an analytical index will do.
Hence Magia Nova! The principle of this new didactic method is a blah blah taxonomic approach blah blah system of mysticism blah blah correspondences blah blah great pedagogy blah blah left hand, right hand blah blah. Ok, enough babble. The whole point is that the Magic User will learn Arts and Elements instead of single spells.

Four are the Arts:

Four are the Elements:

The casters start by knowing an Art and an Element and will progressively get better at casting spells and gain more Arts and Elements. In due time they will fully master a specific type of magic, and summon elemental spirits.

This is the spell list as it is now: 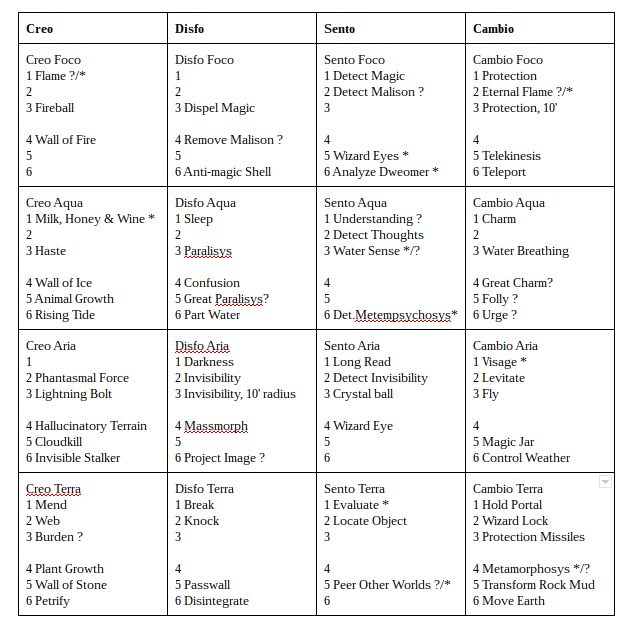 Stars and question marks are safely ignored (they are notes for me). Some of those gaps might be filled, and things rejigged, but that’s the gist of it.

You will find a resemblance to Ars Magica by Tweed and Rein-Hagen. The resemblance is indeed there, but.

First, I love Ars Magica. Gangs & Bullshit owe a lot to it. Also Chthonic Codex. But Magia Nova is a different beast. Merely identifying spell groups with 2 words (or two runes, which is exactly the same) is the extent of the copying. They picked Latin, I picked oldy Italian.

I could have picked English. I didn’t for two reasons: the first is that picking premodern Italian makes it peculiar even for Italians, the second is that it’s better to have domain-specific terms for game elements. If your GM says you’re stunned by someone’s display of wealth, they probably do not mean that your character can only move slowly this round. They just used a turn of phrase which happens to use a word that means something different from a metagame perspective: you’re outside of the game and you use words to describe it that do not mean the same to people in the game. For game terms choose words you would otherwise not use to avoid confusion (no, not the spell).

Second: this whole thing started though with a different approach: create a taxonomy, and see how to allocate existing D&D spells to its subdivisions in an interesting way, rather than coming up with a system and creating new spells fitting in it (which is I guess how the Ars Magica spellbook was developed).

There will be a new, alternate Magic User, the spellcasting rules, the spells sorted by level (with some new spells), a handful of new monsters and, possibly, a few magic items. I have no idea when this will be ready, but given most of the spells come straight from the book it won’t take long.