DODECATHAUMAGRAMS OF THE MANIFOLD NEXUS

The Great Bureaucracy is busy writing a whole lot of thaumagrams writs, busy somewhere in the infinite tangle that is the Manifold Nexus. It does mostly bespoke jobs by hand for the Quaesitors and the Harassers, but a whole lot of work is done with blocks bearing the mirror image of a thaumagram in relief. The block is inked with inks made with a base of aged blessed wizard blood, sinner bile and spider venom, then silk is applied on the block and rubbed energetically, impressing the design on the fabric. These writs are then left to dry until ready to be rolled, stamped and numbered, cased (usually in long hollow bones or tubes of iron or jade) and eventually shuffled along the multiverse crawlspace toward their destination.

Back in the day I read Orion by Masamune Shirow. It has some special juju babble that is fantastic, and it left me very impressed. Seska’s sheer badassery and curves also left a teenager Paolo very impressed.

Anyway, a whole lot of magic in Orion is based about written form. So calligraphy and power words and sigils and whatnot. Here Seska is trying to… I’m not sure. That comic is incredibly obscure. I think she drew a massive ward to keep out Susanoo the god of Storms and at the same time… monitor the water element or somesuch.

Also, Susanoo kicks so much ass in this comic. Probably because he’s a god.

A CATALOGUE OF THE DODECATHAUMAGRAMS 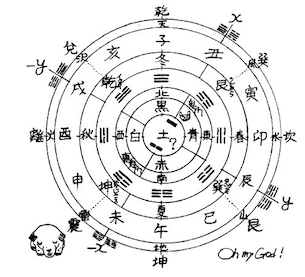 The name says that the DODECATHAUMAGRAMS are twelve:

The eleventh and twelfth DODECATHAUMAGRAM have not been leaked yet.

There are a few ways of using the DODECATHAUMAGRAMS in your game. Mageblade will have another method, and it will be really important for one of the classes.

Writs are special scrolls that are used as melee weapons. Often the printed writs appear in the black market, or become available from bureaucrats in need of a quick penny, usually for at least 500-1000 coins each. They must be unrolled with two hands and then used to hit the opponent. This makes the awkward to use if you are busy with sword and shield already, unless you want to drop your weapon and shield, maybe?

Writs are single-use items. In melee, wield the writ and hit unarmored AC, save applies when specified above. In Into the Odd, they are weapons dealing 1d4-1 which, if they were to deal damage, instead do zero damage and affect the target if the save. As an alternative, they can be thrown up to 10′ away. Once the victim is hit, regardless of whether the victim saves, the scrip is ruined and usually dissipates entirely in thin blue smoke.

The origins of the DODECATHAUMAGRAMS are uncertain. What’s surprising is that some cults worship icons of Saints or complex drawings that are, thaumaturgically speaking, isometrical to the DODECATHAUMAGRAMS. This might hint at a deeper trilaeral symmetry between the Left-Right Hand Path Correspondence, the Manifold Fractal and the Nature of Godhood. Or it might be entirely dumb chance. Or utter poppycock. Further research is warranted. The Great Bureaucracy is not bothered at all by this.

Clerics can be of one of these cults. They lose the Turn Undead capacity, but each cult has an icon they worship and use as holy symbol: pick one of the following invocations. The cleric can use the icon once a day, plus convert not-yet-cast spell slots of any level to power the icon. The icon is not applied, but simply shown to a victim or pointed toward a target within 10′ as an invocation is made, no touch attack needed.

What’s more concerning for the bureaucracy is that some of its secrets have leaked and some savants learnt how to simply trace the DODECATHAUMAGRAMS by hand, in a few seconds. Quaesitors are always on the lookout for this kind of infraction and, when found, Harassers are dispatched urgently to curb it and give an example to everybody.

Do you even Wonder & Wickedness? The DODECATHAUMAGRAMS can be used as W&W spells. To cast them, use the usual W&W rules, but to cast them the sorcerer simply traces the glyph mid air and then concludes it by touching the victim or the target. A touch melee attack might be needed. If the attack fails the sorcerer can of course try to touch the victim again in the next rounds.