Khosura Street Blues: where I get lazy and tell you about how my campaign is going making a post with some pictures, plus an attempt at a Knotromancy School for W&W

I’ve been running one of the two Mageblade playtest campaigns in Khosura [post in Hungarian], written by the always awesome Gabor Lux. I’m playing a prewritten module because I’m playtesting and I’d rather spend more time evaluating how the game mechanics behave and not tinker with the world as I go: less prep is better prep. Also, Mageblade requires no adaptation whatsoever from your typical D&D, you only need to raise[lower] AC by 2.

At any rate, this is the amount of Khosuran underworld we explored in about 6-7 sessions.

Yes in Glasgow we drink a lot of Tennets. Those in the front of the screen are dead PCs to remind players that I am a cruel douchebag.

Khosura seems to be one of those dungeons where sessions alternate between exploratory (finding interesting stuff) and resolving (getting the sweet swag out). At any rate, the party last night was as usual not at its full. In order from right to left: Durgon the Fighter, Alyna (yep, that’s a rogue with a scumbag hat and a monkey), Cailan the Knotromancer with his rope.

Durgon is short because I clearly can’t draw, depicted with his re-re-replaced plate mail. Durgon uses a pollaxe, not a sword, sorry. Alyna has dagers, but never dual-wielded daggers in her life, and I think she actually never made an attack roll ever in two sessions as she always, always slithers away. She’s good at that. Sometimes Cailan goes around with a goat, but only for sacrifice purposes, blame Brendan, and he’s depicted with his pet magic rope. Spaturny not depicted, but he usually goes around with a bag on his head. Rhaegar is also absent, together wish his basilisk-in-a-cloaked-cage.

Wait, Knotcromancer? It’s complicated. In my games a lot of casters tend to study a field of magic but also necromancy, for obvious reasons: it’s a very concrete, god-of-the-flesh, effective, if totally unsubtle school, so its perfect for those adventury shit-hits-fan, make-or-break times.

But Cailan is not like that. Cailan is a necromancer that is totally ashamed of being a necromancer, and never admits being one. So I started calling him Not-romancer. And he got progressively more and more funny (and by funny, I really mean creepy and weird yet hilarious) about his magic pet rope.

At any rate, how did Cailan get his magic rope? I make starting PCs roll on the Kata Kumbas Inheritance Tables. This is the Summoner/MU table:

No game mechanics defined for at least half of these objects. Yes, you can get 4 geese or an axe that never misses its target or a plum shortcrust pie or a pet snake. Roll well.

So Spaturny got a Gnostic Gem of Healing (spend a mana to heal 1d6, once a day) and a Ring of the Sea Gods, while Cailan got a magic rope and a bottled metamorphic ectoplasm.

So it happens that Kailan has a bit of an easy trigger with magic and ends up always with no mana too soon. This is col because he’s forced to deal with what he has available, which in this case is an enchanted rope that can move as long as he holds it. So he used it to lazo treasures away from traps, rescue comrades fallen in deep waters, and so on. And treat it like a pet. Sam (Kailan’s player) feared he was pissing me off with this creative use, but it’s totally, totally fine, and when I groan and facepalm is because I’m surprised by the player creativity.

So Gary asked if I meant Notromancer or Knotromancer, and obviously it’s both.

So, here’s a first selection of Knotromancy spells. All have a 50′ long rope as target.

Brendan, don’t worry, they are not for the revised W&W.

None of these spells have been playtested (except those that are inspired by other spells), so CAVEAT EMPTOR.

Rub a dub dub,
Three fools in a tub,
And who do you think they be?
The butcher, the baker,
The candlestick maker.
Turn them out, knaves all three

A great movie, have not watched the serie yet

The Spy: a full-shenanigans B/X class

Your butcher has always been a bit odd, and did not know the difference between sirloin and ribeye. The baker also, but for the opposite reason: he was honest and delivered always full-weight loaves. The candlestick maker gilting was great but the candlesticks were clearly not well lathed.

That’s because they were not tradesmen.

They were competent spies under cover.

Coverup: the Spy gets some basic training in whichever trade their title is. So level 1 spies get basic training as butchers. At level 2 as bakers. Level 3? Candlestick makers. The problem is that sometimes they are not that competent, but often it does not matter. So for expert tasks they get only a 3-in-6 chance of success modified by their reaction bonus: they might not do a great job, but they are great at selling themselves.

Three fools in a tub: spies in cities can locate another spy in 1d6 days and get useful something in exchange for something (material, contacts, information, safe haven, safe conduit are examples of what can be exchanged) if a successful reaction roll is made. Woe if the reaction roll fails.

Great Coverup: At level 8 they can either roll any of these rolls twice and pick the best result or have a 95% chance of coming up with a convincing reason, happenstance or coverup for the job not to be successful. For example having the workbench collapse, or the horse outside the shop to catch fire, or just mind tricks. Or, surely the best, they can convince you that you seriously do not need that gigot cop today, sausages will be better with turnips, or that, seriously Capitain, the mortar was somewhat cracked already.

Rogue Skills: use 1d6 Thieving, but starts with only 5 points. Gets 1 point per level gained. Or as a rogue of half their level, round up.

Agency: at level 9 Spies can set up an agency. They will attract 1d6 level 1 PCs per season, half of them spies, maximum one per Spy-master level. As they die, they will be replaced as long as the Spy-master does a good job of covering up their demise.

A friend asks how I hexcrawl. 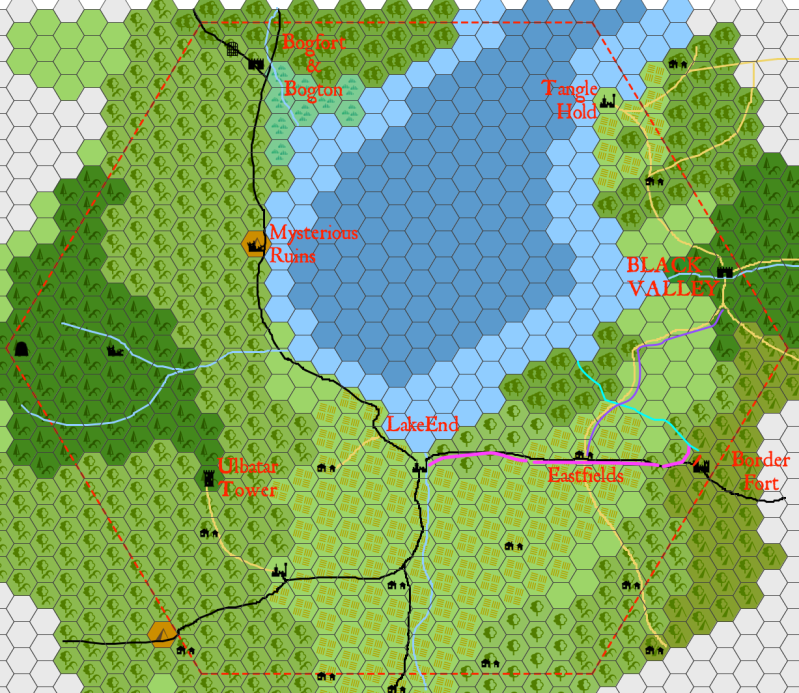 This is how I hexcrawl:

First of all, determine the scale, both time- and space-wise. This is important because of how finely grained is your adventure and setting. I normally use 6 exploration turns per day, of 4 hours each. If 3 are not spent for downtime (camp and nosh), characters take some damage or penalty. My hexes are anything between 24 miles and 1 km (or 1000 yards). In general all these numbers are profoundly opinable but the procedures are based on my (mixed bag of) traveling, orienteering, navigation and sailing experience.

At dawn and evening, more or less frequently depending on whether you are exploring Scotland or a place with sensible, normal, non-crazy weather:

That’s it. Rinse and repeat until you reach your destination or all PCs die.