I’m a big fan of Joe McCullogh’s Frostgrave. I haven’t played as much as I wanted to (mostly because 2020 is a mess), but it’s a fun, swingy skirmish game about wizards getting magic treasures. Have I mentioned it’s about wizards? It also has spells and magic items. And Wizards.

The only issue I found is that during setup and between games the band’s roster changes, and that involves writing the stats of the new members on the army list. My great-grandfather used to say that a lazy person is more industrious than an orchestra director: it goes without saying that to avoid writing soldier stats again and again I made soldier cards.

The PDF has a soldier card per page, following the handbook order. Page 1 is the thug, 2 the thief, etc. The last page is blank, to be filled.

The icons are by Lorc, Delapouite & contributors

David Trampier wrote this comic called Wormy on Dragon Magazine. In one of the issues a wizard opens a portal tracing some runes in the air with a golden stylus.

I made a font with those runes: PG Tramp Runes. You might want to use them with a runic magic system.

If you want to use it for anything commercial, don’t. I’m working on a better, saner version.

The Chthoni Codex boxed set comes with a set of sweet pregens, drawn by the always awesone Jeremy Duncan. You can download them here: CHTHONIC CODEC PREGENS

Burgs & Bailiffs 2 is done. So, click on the image and get the cover, get the pdf here, or buy it on lulu for very cheap. Featuring 38 pages of pure carnage and violence. You know you want to.

Update: the always awesome Charles Taylor wrote a super-easy spreadsheet implementing the maths in his castle construction article. The spreadsheet is here, you must make a copy to change it.

The third issue of Burgs & Bailiffs should come out in January.

So if you want to contribute

To be in the third issue contributors need to:

The plan, if all goes the right way, is to make the third issue a bit bigger and better, start to charge a bit more than cost and send physical copies to contributors.

If all goes the right way means, and there should be no need to explain it, SAVE OR DIE.

Last week Jason Sholtis sent me the first version of a character sheet for AFG. While it was clear to everybody involved that it had a whole lot of merit, I decided to have players use it and then decide.

So we playtested at Glasgow Geek Retreat (also with first-time players, Hey Dawn & Sandy) and adjustment were made. It’s most probably going to be changed again, but not very soon. 🙂

A handful of character sheets are going to be included with each order from the webstore. Because not chucking in some small freebie is a wasted opportunity.

Adventure Fantasy Game characters, at least for my groups, are written on 3*5 index cards. I guess this is because AFG never had a specific character sheet. Until today.

The always awesome Jason Sholtis is flexing his illustration and design chops to prettify my AFG spreadsheety character sheet. You can see it below in all its clawytentaclybeardyness. While the work is not done, you can start using it and tell me how it feels. 🙂 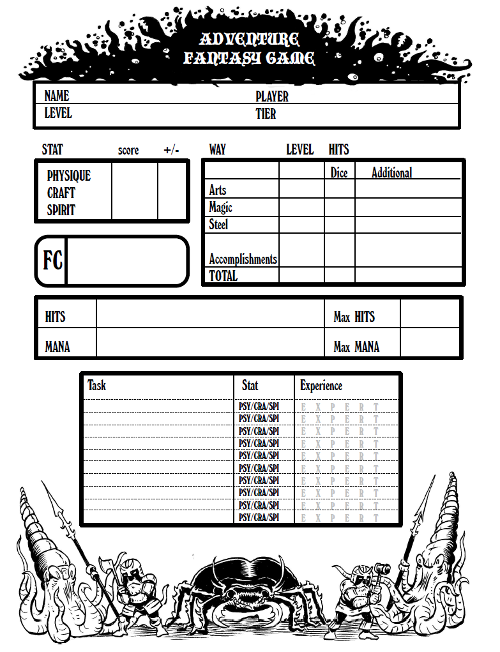 Edit: collaborate to the second issue!

Like the taxman, famine, war, or the Black Death, good things come to those that can wait.

Grim up your medieval RPG!

Bring the worst of the Middle Ages to your Game!

Get Burgs & Bailiffs and unleash it on your PCs!

Comments, as per use, on Google Plus.

Brütal Göry Fäntasy Rölpunk!!! is a simulacrum of WHFRP wrote entirely by yours truly on Scottish public transport. It’s how it’s meant to be played. It’s free.

And by “free” I mean “free as in there’s no Game Fuckin’ Police telling you how to enjoy it, so if you can’t read some of it just make shit up”. It’s also free as in beer, admittedly the second best kind of free [*].

This time around I even used a scanner instead of a crappy camera phone. For a truer experience you can download the Original Edition or, if that’s too working class for you, get one from here or here (lower resolution).

I wrote and designed Brütal Göry Fäntasy Rölpunk!!! Anarky in the Reich!!! entirely on Scottish public transport. It’s some kind of WHFRP simulacra, written without access to any WHFRP material. Because I was on the bus or train and my first edition handbooks are 1000 miles away. If you follow me on Google Plus you might have noticed some hand-drawn maps of a town.

Lake End is the starting town of my Western League campaign. All post-2008 campaigns in the Six Cities Settings have started from here, while before they started from Unis, an independent trading city a few hundred miles due south. Years of adventures made this little town more and more detailed, but all the previous mapping attempts have been functional but horrible to look at and ultimately forgettable.

The map was drawn with a 0.5mm rotring pen on lined paper. Lines help a lot for architectural-y axonometry drawing if you keep the rules vertical. In caser you wonder, they can be ‘shopped out easily.

I’m not an artist and I’m pants at drawing, so it’s far from being good. But since people asked me to share it, it’s here for grabs.

The coastline and hinterland are not finished because, well, you might want to place the town somewhere else without a really productive and chaotic lumber and woodworking industry.