Chthonic Codex is a monster manual, a bunch of spells and caster-related rules and a campaign setting inspired by stuff you would rather not know. Browse the Chthonic Codex inspiration gallery if you want to grok it better. 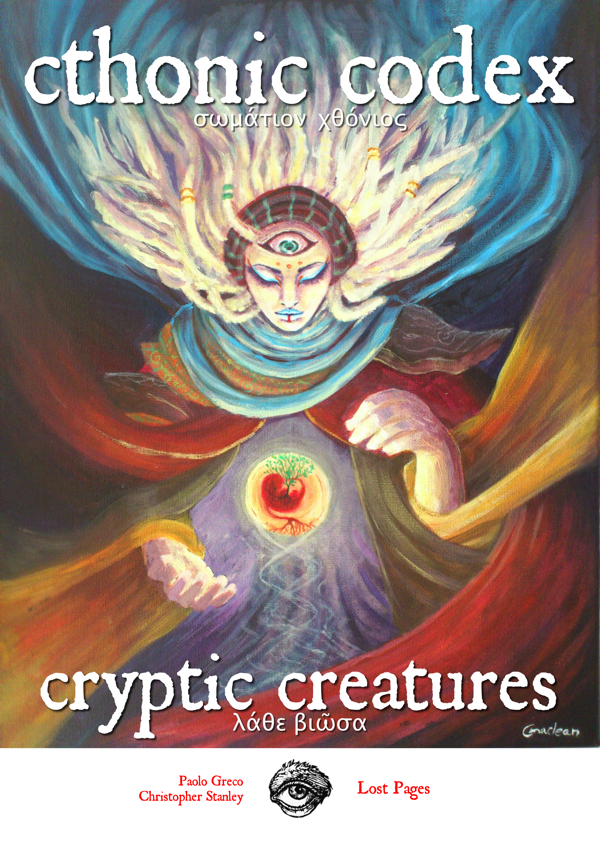 It took 15 months to complete the draft of the first volume. Fifteen months because, while it started as a monsters + setting book, it then grew to become a smorgasbord of setting details and buckets of magic-related new game mechanics. We are talking 180-200 pages there. Then, realizing that finishing a 180 pages book would take me ages, I sliced in three volumes.

Cryptic Creatures is the first volume. It features more than 30 monsters (it’s not fully finalized), so at we are talking at least 66 pages. The contents are the brainchild of me working with Christopher Stanley, which did all the interior illustrations. The cover art is by Claire Maclean. Each spread has a full page illustration on the verso and, on the facing recto, a fragment of the Codex itself and the stats for the monster, for AFG, Swords & Wizardry and other retroclones. Spreads looks like this, click to download the Cephalopod, a new monster and playable race: 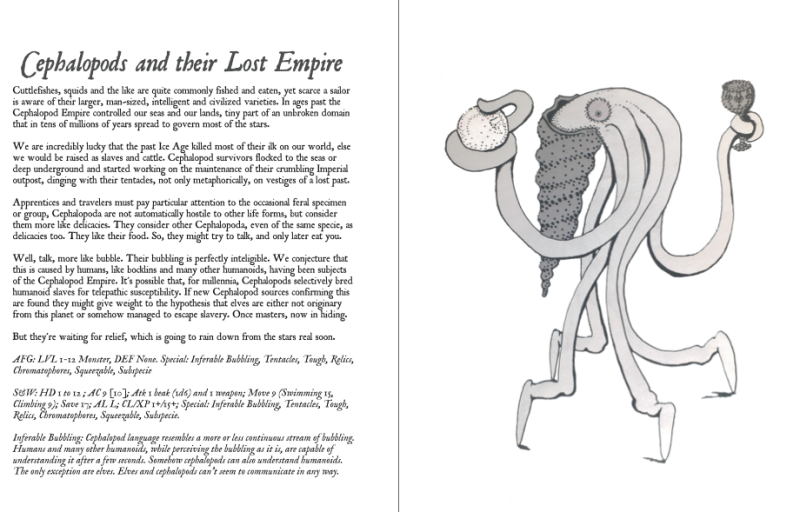 The text above is not final, by the way.

The second volume, Academia Apocripha, deals with the Great Schools of Magic under the Valley of Fire, their students and their secret arts. And more than enough new spells to completely replace the standard spell list. And a couple of new classes, and adaptation of existing AFG spells for S&W and other retroclones. In a way it’s the player’s handbook of the setting.

And mana-tar. There’s a sea of iridescent magic tar under the Hypogea of the Valley of Fire. the mana-tar stirs and changes, chasing our thoughts and our dreams.

At any rate, Cryptic Creatures will ship this November in PDF and Print+PDF.

Now, what about the other volumes? And the deluxe editions?

Yes. I’m going to release this baby in two different deluxe editions, provisionally for 35$+s/h each.

One of the deluxe editions is going to be a boxed set. The shape and style of the boxed set is not certain at the moment. This is because for some reason getting a quote from boxmakers is a nightmare. But I have at least three alternatives, and only one of them is to make boxes by hand.

The other deluxe edition is going to be a handbound book. I decided for a coptic binding because it both fits the setting and spreads completely open when laid flat on the table. Depending on the final layout and budget it could still be possible to have the book bound in dragon skin. *

All deliverables (the second and third volumes and the spiffy versions) will be released before April. In the meantime whoever purchased either the boxed set or the bound book will have access to drafts and prerelease versions. And of course I might be late, and that is the nature of projects.

The Grim Dial: how to regulate grimness and pushing triggers in your games

A few months ago I picked up a new group of players, which then went on to form the Bear Company.

As they started to rampage around the Uplands and the Western League (like all my other groups) I needed to know what they would be comfortable with. The point is that between adults you can discuss these things, but I knew nothing about them, and a few never played before. So I needed a way to discuss which topic was ok to include in my gritty campaign without discussing them. So I sent them an email saying more or less:

my campaign setting is quite grim-realistic. There’s a lot of mud and pillage and historical materialism and proper real-history horror. I’d like to know how comfortable you are with violence, horror and all the horrible things that History books mention. I’m not sure how you people are comfortable with the current grimness level. Orphans and starvation and ogres eating people and mutilations and upper class people being horrible douchebags mean that the dial is set at about 7 out of 10. I’m fine with anything from 4 to 10 (yes, the dial can go up to 11, of course). But before grimness goes to potentially horribly triggery levels I’d like to know if this is too much or good enough or you are fine with trying more or less.

And then we had a short but productive email discussion where people brought forward things that they were not fine with (me included). Then we ended up playing a campaign with more weird than grim, but that’s in the scheme of things.

Anyway, the point is that you want to avoid alienating and hurting your friends/players, and between adults you can have civil conversations without hurting each other. But sometimes you can’t easily discuss this with strangers because you don’t know them.

Maybe even referencing some topics would be too uncomfortable for people, especially with people you don’t know.

The Grim Dial is not perfect, but it’s a handy metaphor to signal limits without discussing the topics themselves. You can assign topics to dial positions and anybody can say something like “I need something lighthearted, 2 or less, like Adventure Time but without kidnapping or postapocalypse undertones.” and someone else says “Yeah, 11 is fine, but no kids anywhere near weapons or sex at all”.

TL:DR: the Grim Dial is an abstracted handle on how grim/lighthearted your game want to be. It’s to be accessible to everybody at the table. It’s there to signal off-limit topics without even discussing them. It’s a safe way to introduce difficult topics.

I’ve been playing a lot of B/X and/or S&W in the past few months (also of AFG, but it’s not immediately relevant to this post). When I run the game, I tend to use the following rules applied to S&W or B/X. Since they need a name, I decided to call them Mageblade! because of the playable Mageblade class.

Ok, I’m going to keep it small and in this post.

WARRIORS roll 1d8 hits per level, +1 to hit every level. +2 saves against physical stuff like poison, paralysis, being crushed. They start with one of the following styles at level one and learn another at each level:

CASTERS roll 1d4 hits per level. +2 saves against magicky stuff. They can cast all spells and have to memorize them every morning. They can cast spells as per the following table, from both the cleric and MU list, and learn 1 spell per level from either list (to be picked at character creation). They can’t cast in armour.

MAGEBLADES roll d6 for hits, +1 to hit every 2 levels. +2 to all saves. They can cast spells only through a specific single weapon they are bound to, but can wear any amour doing so. Their lack of training means they can’t cast as much: all spells are treated as 1 level higher (level zero spells are treated as level one spells) so at level one they can memorize and cast a single level zero spell. They do not automatically learn new spells as they grow in level.

No thieves, but all character use 5MORE for lockpicking, sneak and so on.

When saves are called for, roll 1d20 under the relevant stat to succeed. Apply the class save modifier to the stat. Each level characters get a luck token: these can be spent to reroll a save. 1 luck token is regained with a night of rest, together with 1 hit point. All luck tokens and hit points are regained by spending 100GP per level and CAROUSING ALL NIGHT. The next morning the character will feel awesome but is at -3 to all rolls until midday.

At each level gained, roll all the hit dice for your character (plus the bonus from constitution ONCE): if the new result is better, you can keep it, else increase your max hits by 1. For example a level 3 fighter with 13 hits get to level 4: the player would roll 4d8. On a 15 or more, the hits become that amount, else they increase to 14.

First thing first, the second printing of AFG (R8), is almost sold out. You can grab a copy at the Lost Pages store.

Thanks to everyone that bought a copy! I hope you are enjoying the game as much as I do. 🙂

Second, it would be awesome if you let me know what you would like to be changed, or added or removed from the new revision, AFG-R9. I’ll most definitely massage the critical hits table, most probably add some spells and very probably reduce the insane amount of successes for developing Secret Weapon Techniques. Maybe a few more illustrationss will appear here and there. Expected completion date: early December, books delivered in January (have you tried international shipping in December? Tip: don’t). Somewhat optimistic completion date: mid November, shipped late November. At any rate I should show up at Dragonmeet with a few copies.

This also means that AFG-R9 preorders are open. Just go to the AFG store page and add a “preorder” to your cart, then checkout.

In related news: Chthonic Codex Volume 1 – Cryptic Creatures is almost completely written and laid out. It should come out before AFG-R9. Fingers crossed 🙂