Chthonic Codex: Mysteries & Mystagogues features CHTHONOTRON, which is a pointcrawl generator for the Hypogea. Follow it and you have a serviceable campaign map for you Chthonic Codex campaign, or any similar mythic-caverns-underworld-crazy place with rivers and weird stuff.

So, this is the end result: a map showing canyons in blue, big caves are thick black, narrow caves are fine black. The marks are explained later 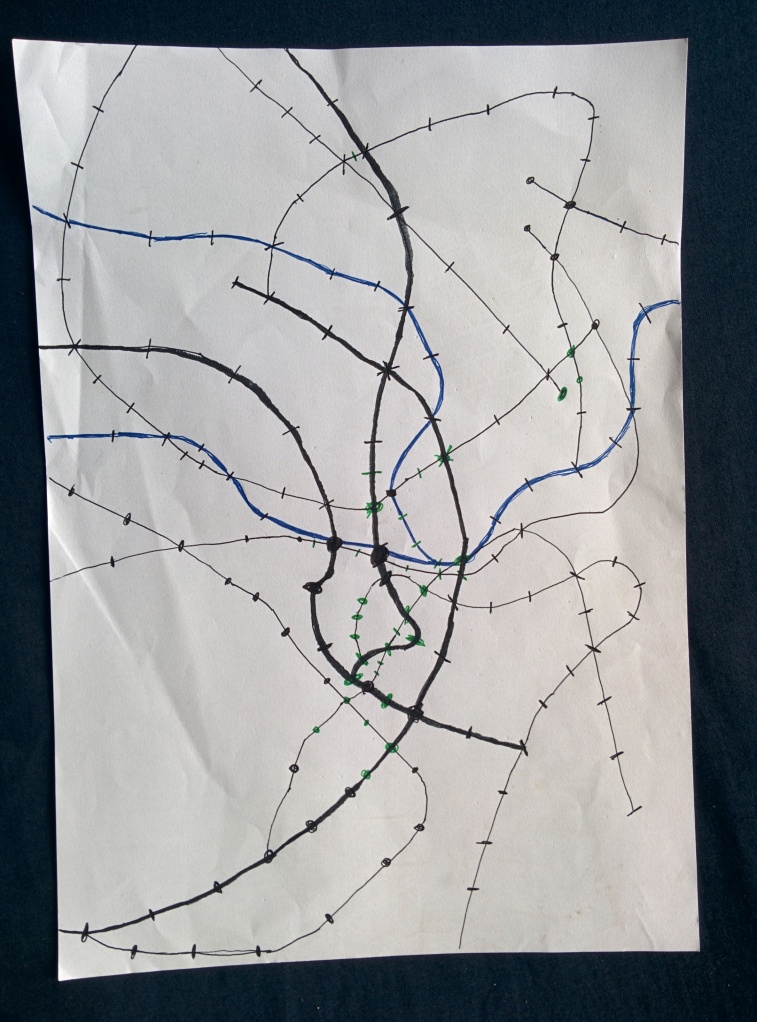 How did I get there?

Repeatedly tossing 5 dice on the map and tracing a line through them. Starting with the first river:

Then the second river, flowing into the first. That die went exactly on the other river randomly, when rivers intersect I recommend making them flow into each other, despite theoretically being able to flow over each other, being underground and stuff. 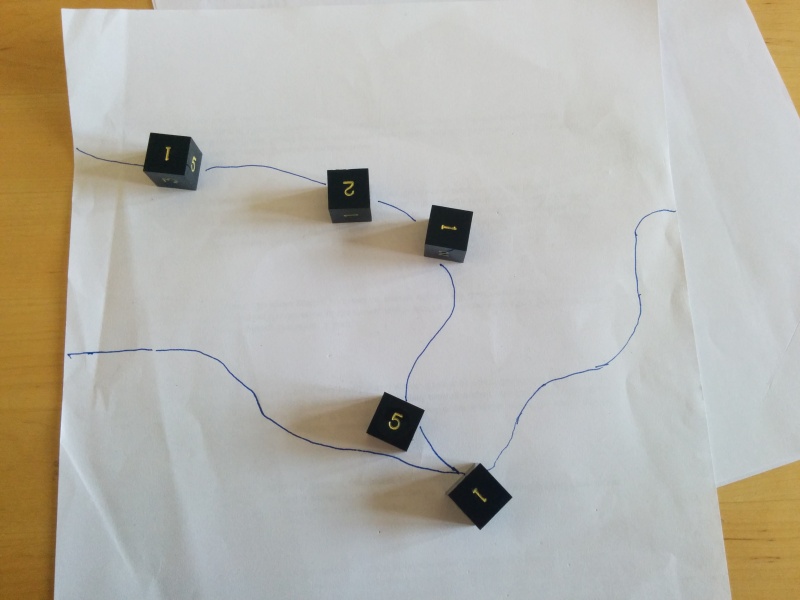 And then repeatedly for the caves. First cave, that leads off map because one of the dice went off map:

Then second cave and third cave. 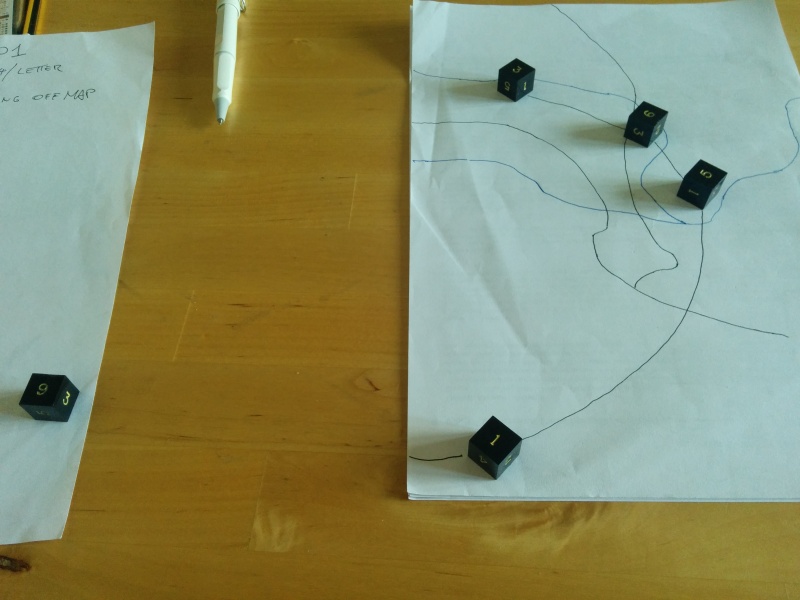 Then I added marks to show distances: but since in this setting you usually walk everywhere, they are marked in time instead of distance. And since I wanted finer granularity in some places, I used marks of different colours: the distance between two black marks is 1 hour, between a green and a black or two greens is 20 minutes. This different granularity is not in the book but it’s a very tiny yet useful hack.

The next step is to populate the caves with the Chthonic Contents section of CHTHONOTRON. I’ll leave that up for later, in another post.

Almanack of Peris and Environs: map and crowdsourcing.

Not much is known about the village of Peris, but we have a map of its environs. 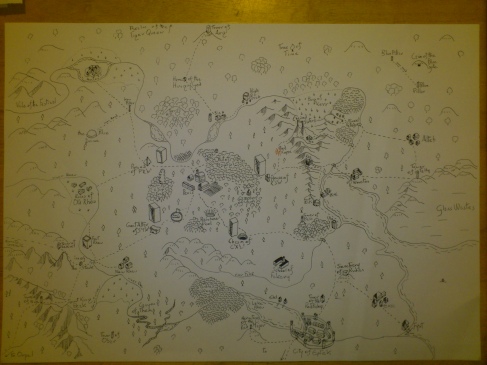 Thing is, I wanted to exercise a bit my drawing. But since I’ve finished it it, I’d like to put it to good use. So it would be cool if you dear reader sent me:

Then it will all be mashed up and published as the Almanack of Peris and Environs, “soon” to be published by your truly, containing the edited, collected submissions.

Of all the submissions I’ll choose the two best (aided by Chris, pizza and beer), give them 30$ of credit toward stuff I publish and publish them completely.

Better scan to follow up soon: it’s drawn on an A1 sheet, and I have only an A4 scanner…

Incunabulum of the Uncanny Gates and Portals, maps

On Shared Fictions Seams: grab Galastanen City and put it in your setting

This is an evocative map of the City of Galastanen.

Things have a reason. Often the reason is given by the reader.

Put it in your campaign.

Put it in all your campaigns.

Stepping through the Lion Gate brings you to Galastanen.

Out of the gate lie many worlds.

Stepping out of the Lion Gate, going home is mostly guaranteed.

Unless you’re following someone else.

Because Galastanen exists in a seam of sorts.

It’s where all the universes were folded and quilted.

If such a concept could be called “where”.

Ignore the incoherent hydrography: Galastanen does not care for your Euclidean space. Water gets there from a mountaintop glacier in another world.

If you follow me on Google Plus you might have noticed some hand-drawn maps of a town.

Lake End is the starting town of my Western League campaign. All post-2008 campaigns in the Six Cities Settings have started from here, while before they started from Unis, an independent trading city a few hundred miles due south. Years of adventures made this little town more and more detailed, but all the previous mapping attempts have been functional but horrible to look at and ultimately forgettable.

The map was drawn with a 0.5mm rotring pen on lined paper. Lines help a lot for architectural-y axonometry drawing if you keep the rules vertical. In caser you wonder, they can be ‘shopped out easily.

I’m not an artist and I’m pants at drawing, so it’s far from being good. But since people asked me to share it, it’s here for grabs.

The coastline and hinterland are not finished because, well, you might want to place the town somewhere else without a really productive and chaotic lumber and woodworking industry. 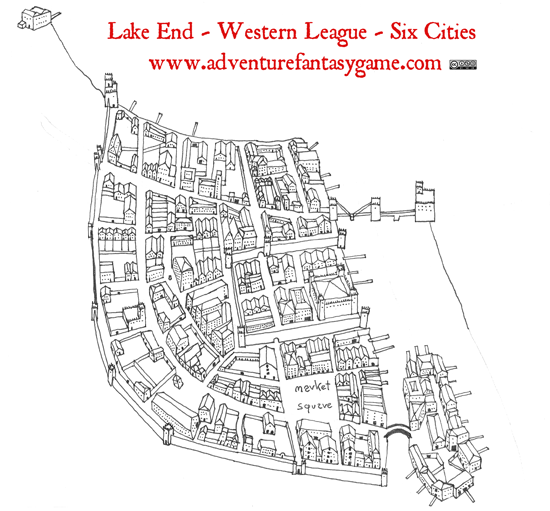 3D Dungeon maps are AWESOME. Warren at War in a Box saw the 3d map, the One Page Dungeon, the tutorial and decided to further promote messing up with players’ attempts at mapping and exploration. He created some 3d dungeon graph papers that
are very, very interesting. If you people though need something a bit more generic you can download isomorphic graph paper simply by googling it. A solid one comes from Incompetech and is free.

Well, the the title of the post says it all: I was sitting all bored at the university occupation/squat and started doodling maps. I just had the stuff out and decided to share. Not as cool as Dyson’s but you might be interested. Also I don’t have fancy photoshops skillz as it’s early in the morning so image quality is teh suck.

Dwarven Outpost is meant to be a small dwarven/drow/trollish/duergar/svartalfar outpost/colony/sublevel.

Entrance is from the east, leads to a room with arrowslits and a trapped, locked door, then to a short corridor blocked by a portcullis. Pit traps before and after portcullis, then another trapped, locked door. It opens on the guardpost with annexed guard room on the west. Forges on the south, temple west, library northeast, workshops and living quarters north, with private rooms clustering around workshops. Northwest is supposed to be some kind of military highquarter, with stairs downwards to cisterns and underground river. Plenty of secret doors allow extensive freedom of movement and deep-strike ability in case of siege.

Strategic note: in case your players want to go rampage on the occupiers and invade try to leave a front less protected, letting some weak isolated defenders fall back, then surround the attacker via secret passages or other means. Sometimes it works, sometimes not, but it’s always great fun trying to outmaneuver anyone with steel-clad dwarves.

A floor plan demonstrates the organizational logic of a building; a section embodies its emotional experience.

Yep I know dungeon geomorphs dice came out already, but a webapp that mashes up side cuts and planimetries would be awesome. As I’m a lazy-thing, enjoy the photoshop I should have done a long while ago using Stonewerks’s & Dyson’s geomorphs… as they are awesome and must be used to build cool stuff.

By the way, I finally wrote a really easy tutorial on how to modify geomorphs to build maps like this.

Yep that’s an isometric axonometric projection. Yep it looks a bit off, and my photoshopping skills are not that good so you can see seams. But it’s late and wanted to share. Feel free to populate, mash it up and use it for anything: leave a comment or a message and I’ll put a linky thing to your content if you want. 🙂

If I’ll ever do this again, I’ll just write a batch transformer for the tiles…

UPDATE: Qubish polished the map and numbered the rooms on his blog “Of Dice and Djinn“.